Today we got up, had a nice breakfast/ dinner at our guest house and then walked into town but not before putting our money in two plastic freezer bags to keep it dry. We decided to have a drink before we collected our tubes and headed to the river so sat at a bar and had a drink. We didn't want to arrive too early as we had read that it doesn't really kick off until between 12 and 2pm. At half 12 we couldn't wait any longer because we were excited so headed to the tubing service in town. You have to pay 55,000 Kip to go tubing, This includes a tuk-tuk to the river and a tube. You have to sign a disclaimer stating you can swim and to say you are turning down the offer of a life jacket as well as loads of other stuff stating that if anything happens to you to is not the fault of the tubing services. You have to leave a deposit on your tube of 60,000 kip. This only covers damage to your tube, if you loose it you have to pay an extra 70,000 kip. The only other rule is you have to have your tube back by 6pm otherwise you are charged an extra 20,000 kip. We thought that would be no problem as that gave us 5 and a half hours to get down the river. In dry season it takes four hours but in wet season (like it is now) it only takes one hour. We met some people at the services and shared the free tuk-tuk with them to the start. They drive you 4km up the road so that you can tube back into town on the river.

Bare in mind that we didn't think that tubing would be any good. We thought it would be full of drunk idiots thinking they were cool but it is actually awesome. You just have to take it for what it is. A really fun afternoon, drifting, socialising and drinking on the river.

When we arrived at the river us and all the people on our tuk-tuk wet our tubes and stood in the river laughing, no one wanted to be first as the current was stronger than we expected. Liam was the first in and he set off down the river, Chelsea didn't want to be left behind so she was next. We floated down the river for approximately one minute before the first bar appeared and we decided to go to it. There are people at the side of the river working for the bars who hook you in and pull you to shore with half full water bottles tied to a rope. As soon as you enter the bar you get a free bracelet and a shot of Laos tiger whiskey. We had a beer, sat with our tuk-tuk friends and talked. Our money was soaked within the first 30 seconds of tubing but it doesn't matter, we still spent it and as our change was also sodden we assume everyone's money is soaking wet. The bar was quite full to say it was the first one and they have music on. People lay sunbathing and talking, it was nice. After we finished our drink we were eager to get going. We set off back down the river and floated for around approximately three minutes until the next bar.

This pattern continues down the river until you get to a bar called 'the last bar'. At each bar it was really busy, music was playing and there was loads of people socialising and drinking. We played table tennis and volley ball, sun bathed and played beer pong against other couples. At one point we were a team of three with a German lad in an illuminious vest who had been tubing for three days in a row. With every drink you get a free bracelet and you get as many free shots of whiskey you can manage. It is really fun. Chelsea was surprisingly good at beer pong and at one point we were playing against a German couple when a lad came over to cheer us on. Chelsea was ecstatic when she made the winning shot.

At the last bar we played volley ball with a huge group of people. it was really fun and every time the ball went into the river a Japanese lad saved it as if it was more important than his own life. He ran down the hill, jumped in the river and saved the ball, was pulled back to shore clutching the ball with everyone cheering him from the side. it was like something from total wipeout as he face planted the river every time. Liam apparently has a hidden talent for volley ball which Chelsea seriously lacks. She was so bad the two times she managed to hit the ball everyone cheered.

The bars are fun but the floating in the river is peaceful and beautiful. There are mountains either side and it is quiet and tranquil. It is a beautiful setting and even in wet season the river is still a smooth ride. Liam however managed to loose a flip flop and his St Christopher on the last leg of the drifting as well as capsize and have to be hooked out by a man on the side.

When you reach town again there is a sign which says 'stop tubing' where you have to get out and walk back to the tubing services. We were having such a good time us and another hundred people were late taking our tubes back and had to pay the fine. It was definitely worth another two pound though. Although it is popular and everyone comes to Vang Vieng to tube we can see why. It is a really really fun day. As long as you are not stupid and don't get totally wasted it is awesome. The bars are great and the tubing itself is lovely, floating down the river on a giant tractor inner tube sounds ridiculous but don't judge it before you try it, its worth every penny of the seven pounds it cost us.

P.S we have no photos because we didn't want to ruin our cameras so here's a random one from the day before 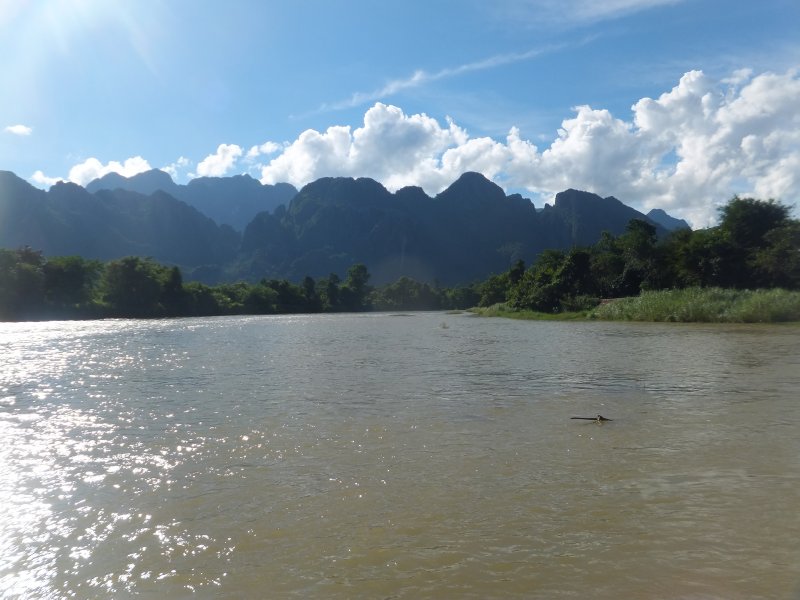 Chels and Liam glad to hear you are at last experiencing and doing some great things I envy you but I don't think I would have had the bottle to go down a river on an inner tube although it sounds good fun.Good to hear from you again enjoy every minute hope you don't have to go into rehab when you get home with all the drinking LoL. Lots of hugs and kisses from Nan and Grandad xxxxxxxxxxxxxxxxxxxxx