The last two days have been more or less none stop. We are making up for the time we lost when Liam was sick. It started yesterday morning at 5am.

We woke to see the almsgiving ceremony. We have read a lot about it, not all of it is good where the tourists are concerned, and we wanted to see it. For anyone that does not know, alms is a service where the people of Luang Prabang, or any buddist, give food to monks. In Luang Prabang it has a long heritage and we were eager to see it. We were not disappointed. We sneaked out of our guesthouse, trying not to wake the man sleeping in the lobby on the floor and sat down on the pavement with a small collection of other tourists and locals. We did not have to wait long for the monks to appear. A long line of saffron robes came around the corner and slowly made the way down the street. 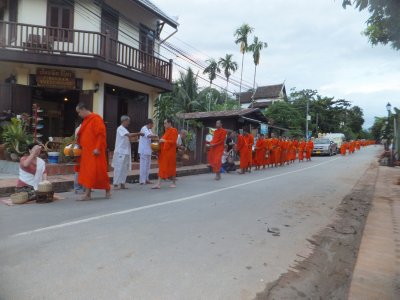 The locals were waiting to give their gifts to the monks and thankfully the tourists stayed at a respectful distance and silently observed. We have read some horrible stories of people shoving cameras in monks faces and joining the line. We believe that we should not get involved with the ceremony as we are not Buddist, but other tourists do, and it is made easy by some locals that walk around selling rice for you to give. Luckily for us everything was ok and we sat with another small cluttering of tourists and watched the monks pass through our street, the only sound the occasional camera click. 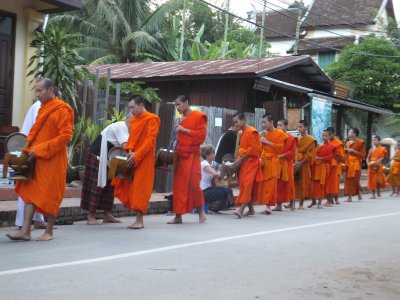 The monks had passed us by 6:15, so we decided to go back to bed for a couple of hours. Once refreshed we went out for breakfast and then looked into renting sme bicycles. They cost us 20000kip each and although a bit worse for ware they would serve the purpose of taking us around the city. We cycled for a couple of hours, at first it was unbelievably hot but after a while it cooled and was really fun. We cycled along the Mekong and Nam Khan rivers admiring the views, through the streets calling at a couple of handicraft shops and ventured further into the proper city rather than the tourist quatre. When our legs had had enough we stopped off at a cafe and spent an hour so talking and people watching. It was a very nice afternoon and Luang Prabang is definately best seen by bicycle. 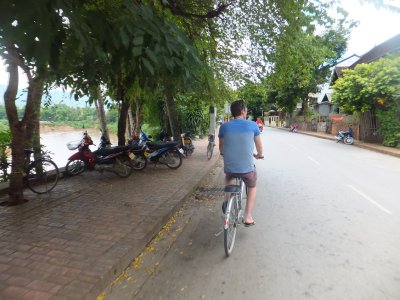 Our bike ride tired us out so we spent is couple hours re cooperating in the guesthouse before going back out to see the sunset from the hill in the centre of the city. It is called Phou Si (sacred hill) and It is hard climb. Around 300 steps meandering up a steep hill. 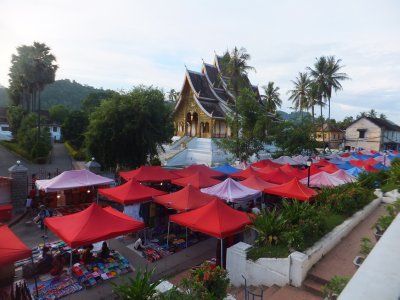 There are a few temples scattered around at various levels but we bypassed the straight for the summit. The fee to get up is 20000 kip and the view at the top is more than worth it.

You have a 360 degree view for miles, one one side the city and Nam Khan river, the other is the Mekong and green mountains stretching as far as you can see. We sat, catching our breath and taking in the view for a while. There were a lot of people by the time the sun was ready to go down so we left just before sunset as it was a bit too busy for us but the view was spectacular and worth the exhausting climb. 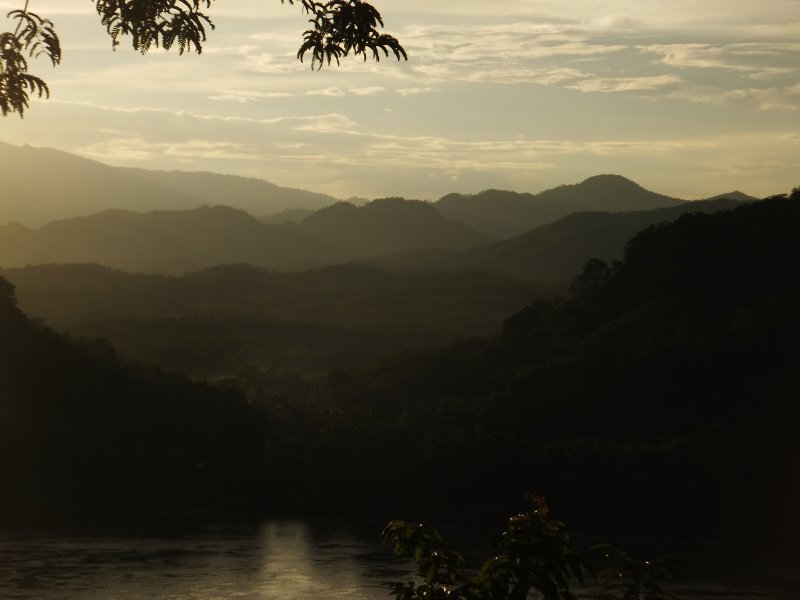 After the action packed day of yesterday we had a little lay in this morning. It is also Liam's birthday and Chelsea has spoilt him as usual with a nice card, and a book he wanted on kindle. He is very happy. After a slow breakfast we decided today to get out of the city. We have been here for seven or so days now and fancied something different, so we went to one of the waterfalls, Kuang Si.

Most people go via tuk-tuk but we did not want to do that so instead rented a motorbike. The price was 100000kip which is extortion compared to Thailand, and we had to sign at least a dozen contracts but by noon we were on our way. After searching the Internet for directions and failing Liam decided it could not be that difficult and we can wing in. All he knew is that is was south. Needless to say, almost immediately after leaving the city we became lost on a dirt road in the middle of nowhere but it was not for long and it was the only time we got lost. The drive is awesome, the road, once you get used to driving on the right, is easy and snakes up and down hills passing villages, rice fields and the occasional herd of water buffalo. It is 32km to the falls and took us around an hour. 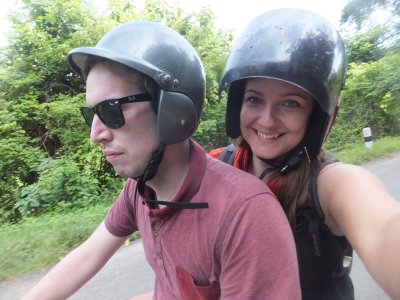 We arrived, parked up and payed the entrance fee, 20000kip. For this price you get admission to the park, the falls and a bear sanctuary that is the highlight of our daytrip. We just can not help ourselves. The bears is the first stop and is several large enclosures for asatic black bears that have been rescued, some from pets and performances but mainly from the evil bile trade. Anyone who does not know about the bile trade should spend five minutes reading about it, it is horrible. We have found out about it whilst been out here and have looked into several bear sanctuaries, mainly in Veitnam, so were very happy to come across this. There were at least a couple of dozen bears but they were all happy and well looked after. The enclosures were jam packed with things for them to do and there was lots of information regarding how they are looked after and enriched, it was great. At the end there was a stall selling tshirts to raise money for the sanctuary and we could not help but buy two. 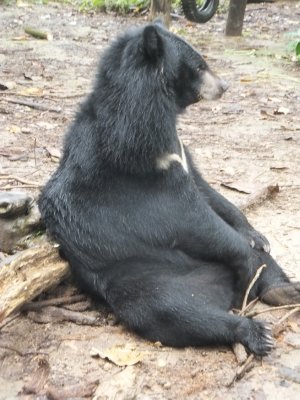 Then we walked on to the falls themselves. Kuang Si is a multi tier waterfall with several pools where you can swim, it is beautiful. Although the path was slightly treacherous due to mud, we walked up to the fourth tier. 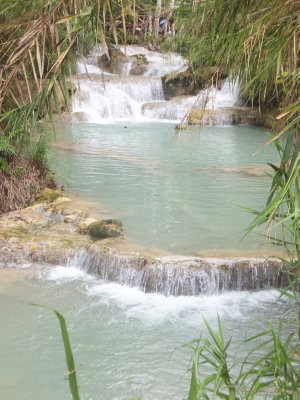 The water in the pools is turquoise and clear, as it is wet season the falls are quick and the tiers vary from a couple of feet to at least twenty. 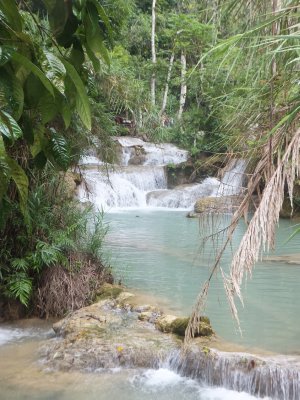 As usual for us we found a pool with less people and got changed for a dip. The water was fresh but really cold, the air temperature had dropped since we arrived so it was not as refreshing as it could have been. We made do with a paddle before returning to dry off on a bench and admire the surroundings. We were interupted by a massive downpour though and had to make haste to some shelter. Since being in Luang Prabang, rainy season really seems to have kicked in. We have had rain every day, and even though only for an hour at most we have been caught in it every time. We waited until the worst had passed before retreating out and calling for a drink before our drive back to the city. On the way back, for a change of pace, Liam let Chelsa drive as she is now capable, give himself a turn to sitback and enjoy the view, after all it is is birthday. 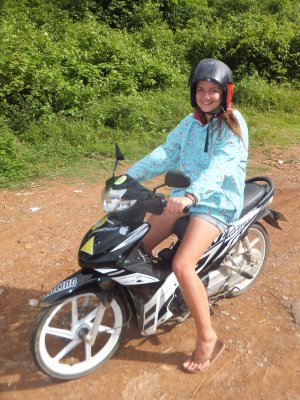 We were back around tea time and Liam has decided to go out for Indian Food tonight. 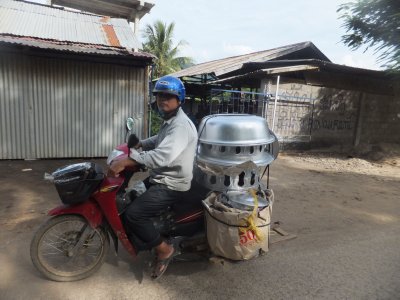 Hi you two, good to talk yesterday and once again Happy birthday son. Seems ages since I was with you. Glad your on the mend and can start exploring again and thank you Chelsea for taking care of him.
Nice to see you have taken control of the bike Chelsea.Views from top of that hill look amazing ! Hope the other tourists didn't ruin the almsgiving ceremony I know how you two like the old traditions that go on out there.
well take care and enjoy the next few days xxxxxxxx

HAPPY BELATED BIRTHDAY LIAM.
Sounds like you are feeling a bit better so that's good to hear xxxx

Another perfect couple of days (so jealous)lol.
Love and kisses always
xxxxxxxx mum and dad xxxxxxxx