Cycling the vibrant streets of Jaffna.

After a relaxing week in Uppuvelli, an amazing underwater adventure in Pigeon Island and just about as much reading and walking on the beach as we could handle we decided to move on. Our guest house informed us of the times of the local buses and arranged a tuk tuk to take us into town. By 7.45am on Sunday morning we were on the bus heading to Jaffna. The bus was classed as 'semi luxury' but there was nothing luxury about it. It was the usual crowded bus, all the windows open and loud Hindi music blasting out, as well as the obligatory children who love to stare at our strange western faces. We bought some Dahl waddies from vendors for breakfast who get on and off of the busses to sell all sorts of things from snacks, drinks, colouring books, jewellery, peanuts and beg or ask for donations for hospitals. The bus made a few pit stops on the way so people could buy snacks and drinks. One of the stops was a few huts specialising in corn on the cob. People went wild for it and literally everyone bought a carrier bag full of warm corn to eat on the bus. It took 7 hours to arrive and as you approach the north any foreigners have to get off the bus at a checkpoint and declare themselves and their business with their passports. As you venture further north you start to see more and more aid agencies. The road was mostly rural with small houses dotted in the fields and some passengers seemed to get off literally in the middle of nowhere.

When we arrived into the town of Jaffna the bus dropped us off near the market. The town looked abandoned, we thought we might not yet be in town as there were no people and no shops open. We got a tuk tuk to the street with the guesthouse we had picked. It only took a few minutes and we drove through more empty streets to get there. We are staying at Theresa Inn for 2000Rs per night. He is a very welcoming gentleman with two little excited dachshunds to play with. It was after 3.30pm when we arrived and we were hungry and thirsty so decided to venture straight out. The streets around our guesthouse are extremely quiet small streets with small shops, all closed and houses. We walked for a long time and nothing was open. We headed towards town and found a place our guesthouse owner had advised. It was a big empty South Indian cuisine place. They were shocked to have customers but fussed over us and served us two huge portions of byriani, chicken and chocolate ice cream.

We were so tired from the long journey that we got a tuk tuk back to our guest house, had cold showers and then hibernated until the morning.

After our first impressions of Jaffna yesterday we were not really sure what to expect today. Our guest house made breakfast of severely crispy toast and eggs and after a brew we were ready to go exploring. We rented bicycles and set off to see the sights. It turns out that the deserted area the bus dropped us off at was the town centre so we headed back there. It was immediately obvious that yesterday was a lot quieter because it was Sunday and today the streets were full of little shops with friendly shopkeepers.

As we cycled the quiet residential streets people sat outside their houses said good morining and hello and many people just stared. As we got closer to the town centre the streets got busier with traffic and there were more and more people on the sides of the road. 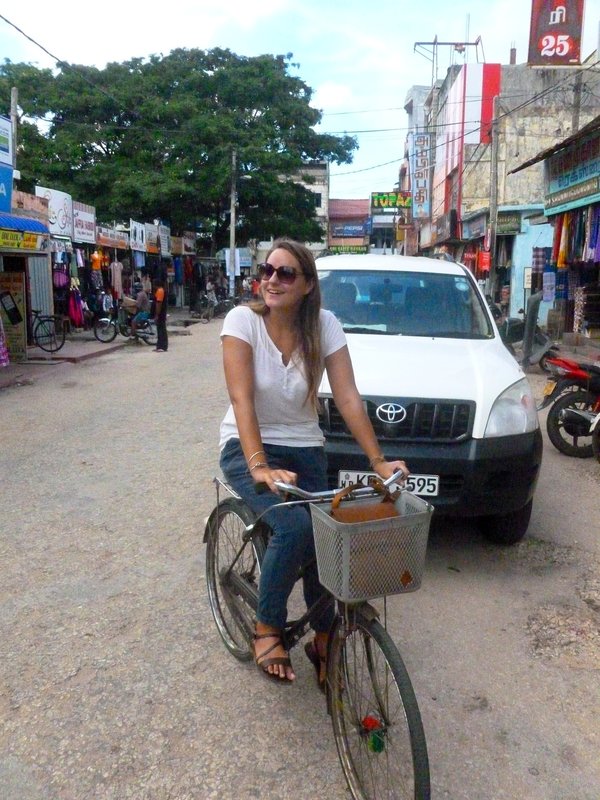 In the centre we stared with wide eyes at the collections of shops and eateries. Many were small shops, packed to the rafters with produce and one street was filled, every shop with jewellery makers. The shop fronts were decorated with colourful signs. 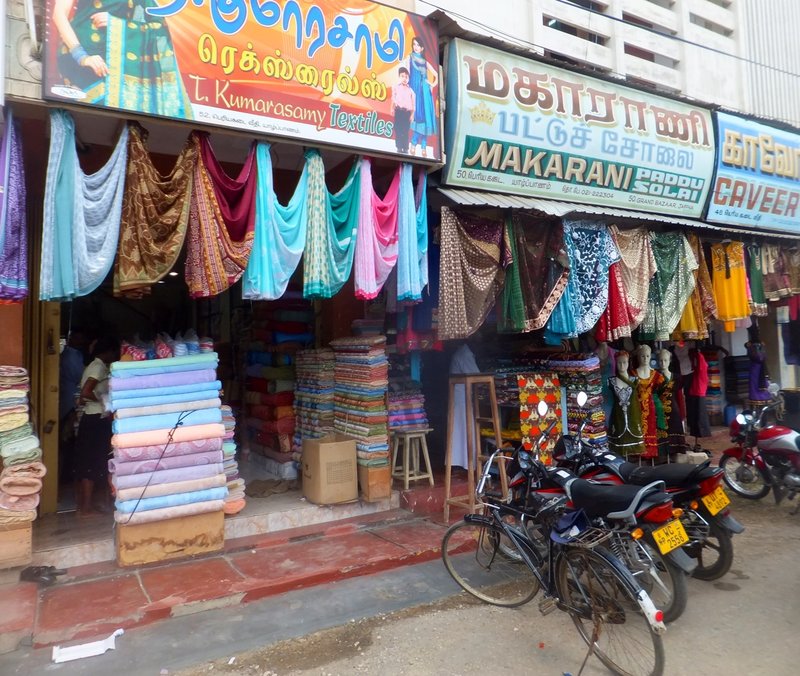 In between the colourful sari shops, the dried fish stores and the motorcycle repair shops were often shops in disrepair. Just concrete shells with exposed brickwork and overgrown with plants. We cycled through the vibrant and busy town centre and headed for the fort. 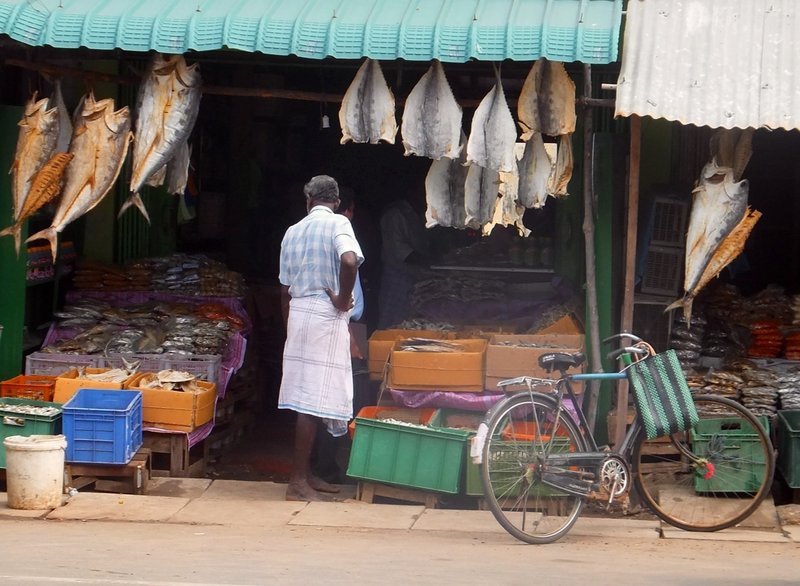 Jaffna has one of the best examples of a Dutch fort in the whole of Asia. We cycled around the outside, admiring the coast line. 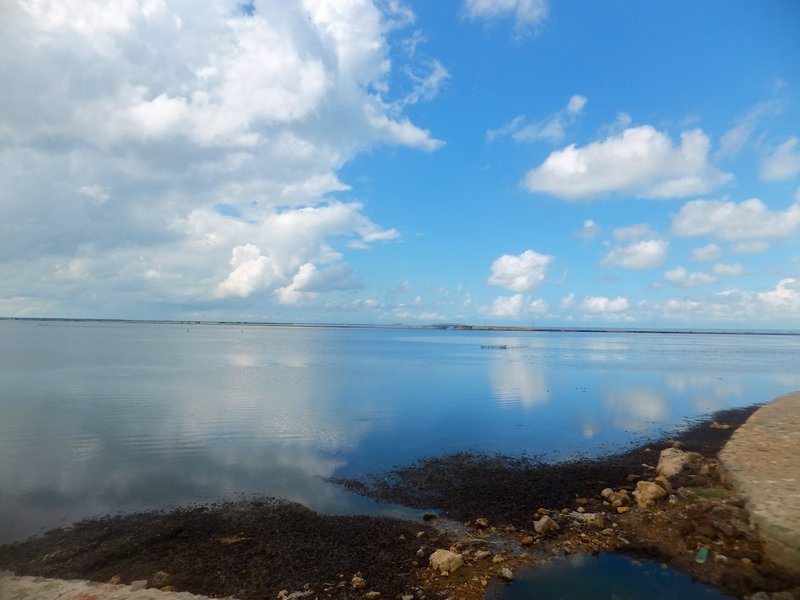 The area around the fort and the fort itself is being renovated. The coast road sits along side a landscaped leisure area with a winding path to admire the coast. It was strangely empty however apart from workmen who shouted hello, how are you as we cycled past. 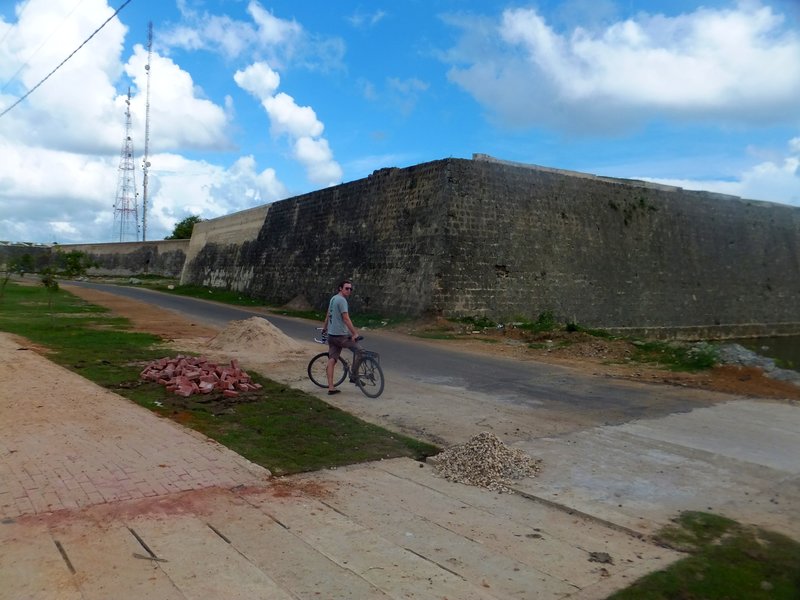 After circling the fort it became unclear where we could actually walk inside. After a full lap and a half, and asking the advice of two friendly strangers, we had been pointed in opposite directions and were more confused than before. Chelsea finally asked a military officer and he pointed us in the right direction. The fort is half way through renovation and it is actually really nice. 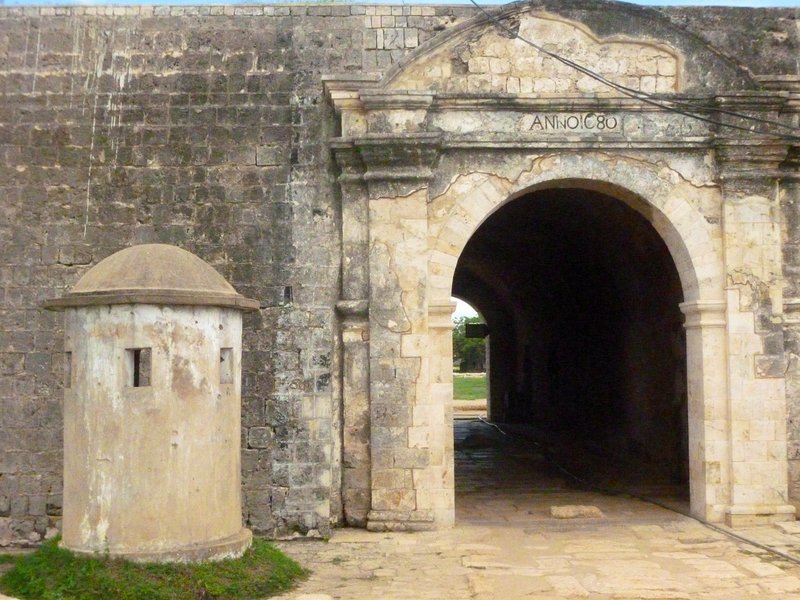 It is a star shape, the big walls landscaped with grass and the whole thing surrounded by a moat. 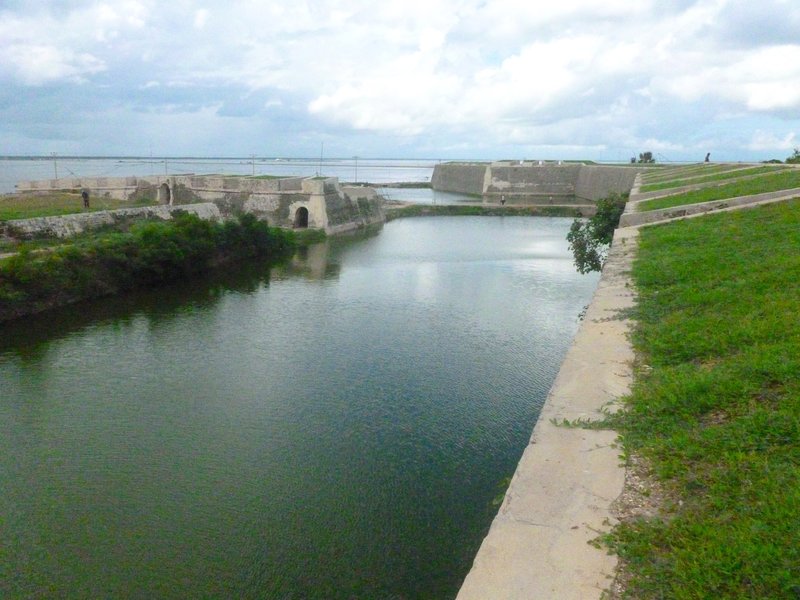 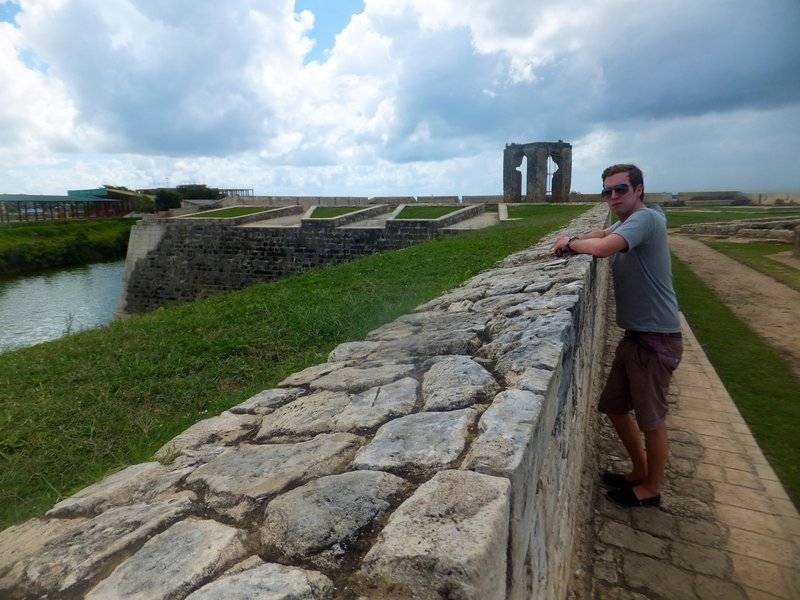 We explored the walls and the tunnels as well as the visitor centre and when we finally became too hot to be interested we decided to search out a cold drink.

At the entrance there was a corigated metal hut with a Pepsi sign on it so we sat and drank two cold pepsi's in the shade to cool off. By this point it was midday and we decided to head into town to eat. We came accros a very small local vegetarian place who welcomed us with big smiles and fussed over us. In the window they had a big selection of short eats and we ordered a random selection of small fried snacks and an illuminous orange fizzy drink to wash it down with. We got a tray of different vegetable rotis, and Dahl waddies on a tray. We were given two plates made of banana leaf which a dollop of chilli dip was spooned on and a squirt of tomato ketchup. 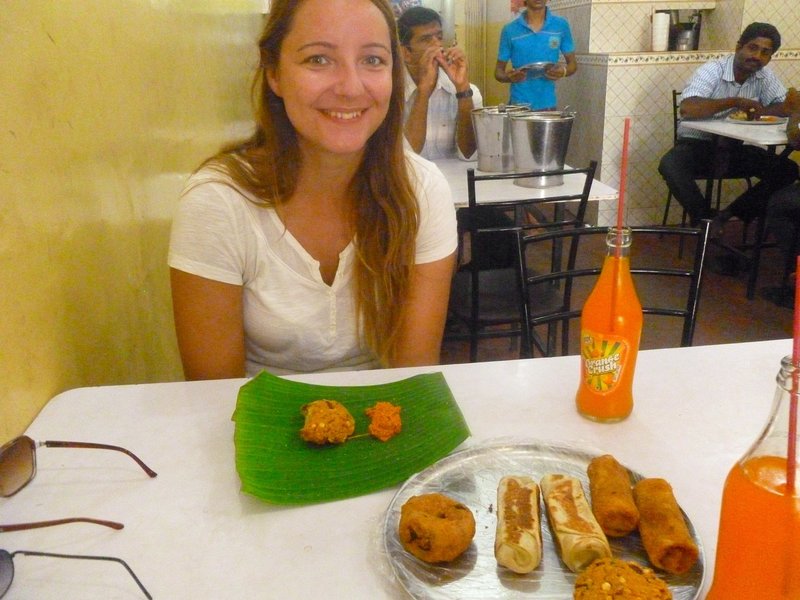 The short eats were delicious and Liam ordered a cup of tea for dessert (yes the tea is so sweet it tastes like liquid toffee!).The employees were all very interested in us and the staff came over to watch us eat, especially Chelsea. Within five minutes normal people who had seen us through the door had decided to come in for a look and the place was totally packed full of people smiling and staring at us. All their chairs were turned our way, some men were not even eating, they had just come in for a sit down and a look at us. It wasn't intimidating as everyone was very friendly but we had to have a giggle. Lunch cost us £1.50 and we were full when we left.

We explored the town a little more, admiring the Hundu temples the most. Jaffna is extremely diverse, next to a Mosque is a church, which is next to a Buddhist temple and down the road there might be a Hindu temple. Our favourites are the Hindu temples. 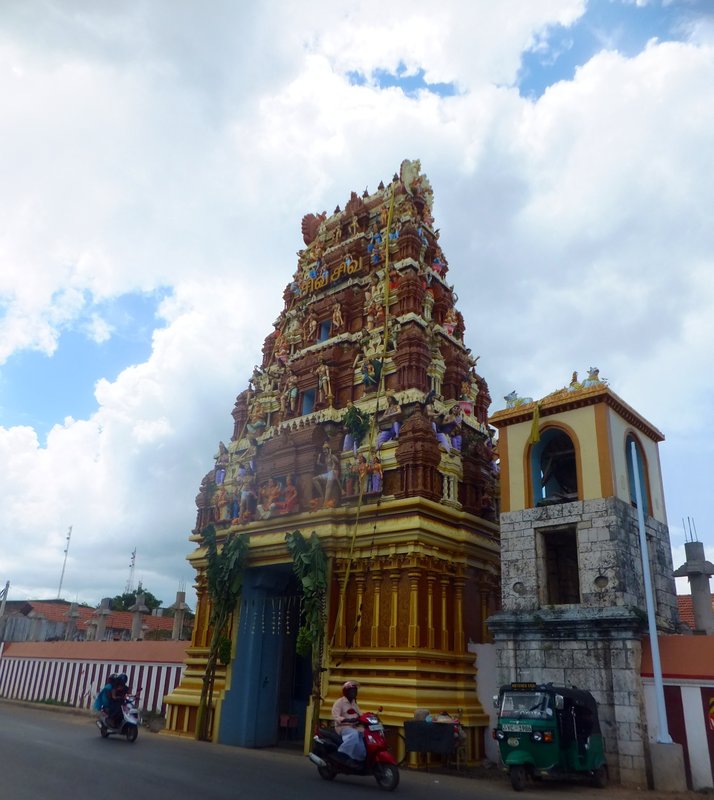 They are beautiful. They have big ornately decorated facades filled with sculptures of gods and stories all painted in lollipop bright colours.

By afternoon we were too hot and tired so we retired back to our guest house. Jaffna we have realised is a subtlety beautiful place. The suburbs just outside the city have a maze of quiet streets, one story houses, fields full of cows, goats on the roads and friendly local people. 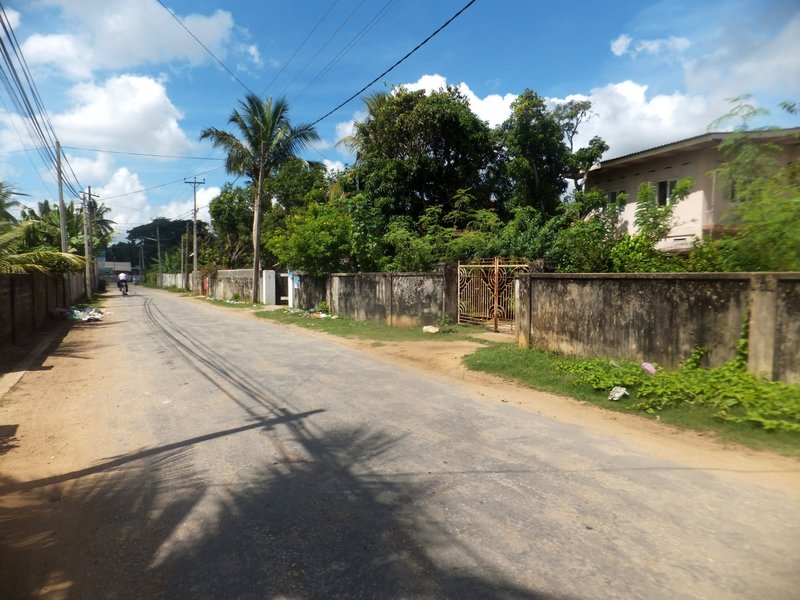 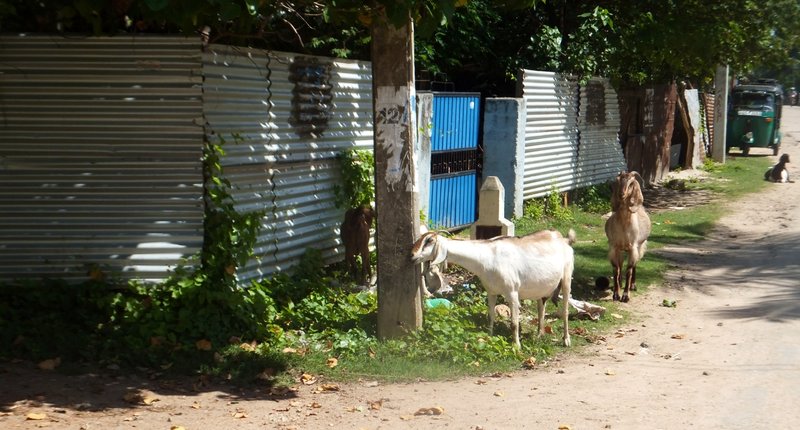 As you get closer to the city it bursts with the vibrancy of a rich culture both in atmosphere, smells and colour. It is laid back and slow compared to other Asian cities but we cycled around with open mouths at the diversity and creativity. It's local people we have found to be some of the most welcoming and friendly and everywhere we have been people have smiled and spoke to us with kindness. In between all of this however the city is still recovering from an obvious hardship. 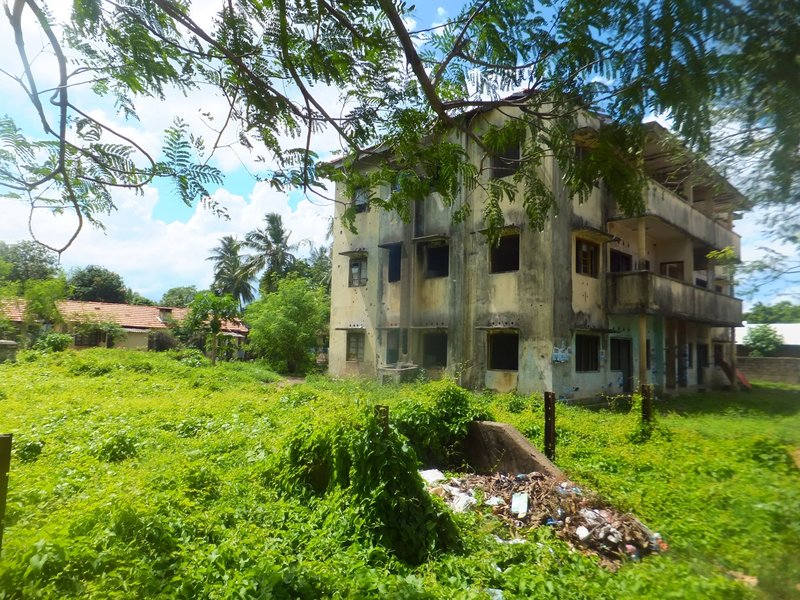 Between the colourful facades of shops and houses, are broken and crumbling ruins of the war. Many places are currently being restored but dotted amongst the architecture are walls filled with bullet holes, half demolished houses and empty shops. The people it seems despite all this are optimistic.

What a lovely blog very informative good photos the Temples are beautiful very colourful had to chuckle at you in the cafe the man in the background looks very intrigued by you .Glad everyone seems friendly take care lots of love Nan and G xxxxxxxxxxxxxxxx