On the road to Hikkaduwa

We thoroughly enjoyed cycling around and experiencing Jaffna and had one more day to explore. We decided to go for a walk and ventured into town on foot. The weather in Jaffna has been scorching and we arrived hot and bothered and ducked into a local eatery, a man welcoming us at the door. We were taken to a family area around the back as in a lot of places in Jaffna women eat in a separate area to the groups of men. We yet again had an excellent meal, spicy chicken thighs, Dahl, a coconut sauce and a spicy chicken gravy, served with rotis to eat it with and fizzy drinks. It was delicious and we were looked after by the staff.

After this we walked the streets, found an ATM and then just became too hot and full of curry to walk anymore. We got a tuk tuk back to our hotel and enquired about the buses to Colombo. On the normal local day bus it takes 11 hours to travel from Jaffna to Colombo and we really didn't fancy such a long journey so soon after our bus ride to Jaffna. The other option was to get a night coach. We hate night buses but the benefit of air conditioning, a seat that reclines and three hours taken off the journey appealed to us so we decided to go for it. We got the bus that night rather than waiting around for a whole day. Our guest house arranged a tuk tuk to the private bus station.

It was really busy with vendors and dark and we were the only western faces so attracted a lot of attention. We went to a few vendors, bought some snacks, biscuits and fruit and waited for the bus. It was late which coupled with a few Sri-Lankan people telling us we should call the number on the ticket as it might already have gone panicked us as the transport in Sri-Lanka is always on time. Eventually it turned up and we were pleasantly surprised. We had to put our jumpers on as it was a bit cold but it was quite comfortable. It left around 8pm and we didn't get much sleep as it had a TV blasting out but we managed a few hours with our ear plugs in. We arrived in Colombo at 5am and we were no sure where he bus stopped. It went through the city centre and went further and further into the suburbs. When we got about 6km out of the centre Chelsea asked the conductor where it finished and everyone was a little confused and began to ask us where we wanted to go. We told him we just wanted to be somewhere we could get a bus heading towards Galle and he said he would drop us off at the bus stop.

A few minutes later however a public bus to Galle overtook our bus and the conductor jumped off and stopped the bus. We frantically collected our bags and ran straight onto the bus. It took a few hours and we had reached Hikkaduwa, absolutely shattered. We checked into Why Not guesthouse for a reasonable 2000Rs a night and went to bed.

Hikkaduwa is a beach town in the west coast. It's not got particularly good reviews but we wanted to go somewhere new and somewhere on the coast for our final few weeks.

After recooperating we went for an explore. Our part of the beach is narrow with lovely blue sea. Our guesthouse has a restaurant right on the beach with beautiful views and we had a late breakfast of bread, curry and sambal and a nice strong brew. 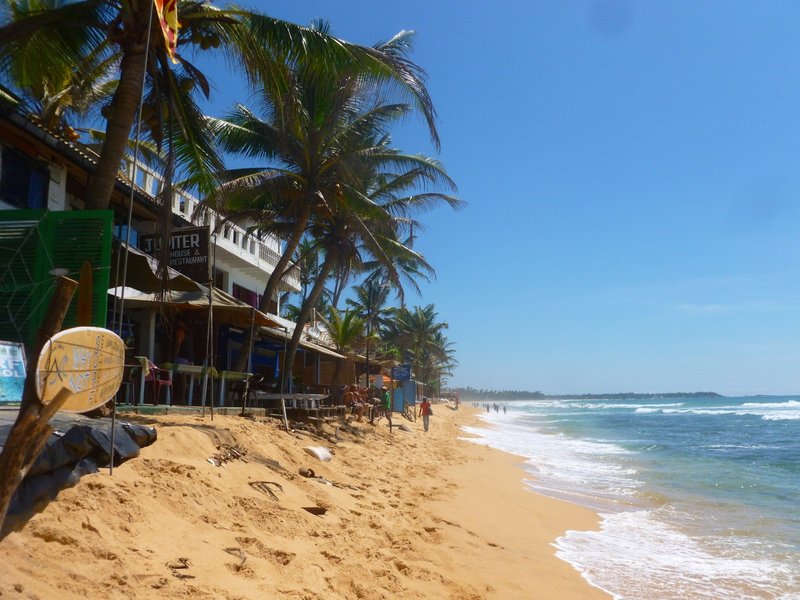 We walked down the beach. It gets wider towards the centre but a lot busier. At the end the beach is empty, just a wide stretch of golden sand and blue sea. We walked around the cove, watching the surfers and enjoyed a cold beer in the sunshine. The beach is busier than we would normally like but it is really big, clean and beautiful so it doesn't seem crowded. Bars have their own sunbeds you can use for free and we have enjoyed laying in the sunshine, swimming in the sea and talking to the many vendors, trying to sell, massages, textiles, jewellery and spices. 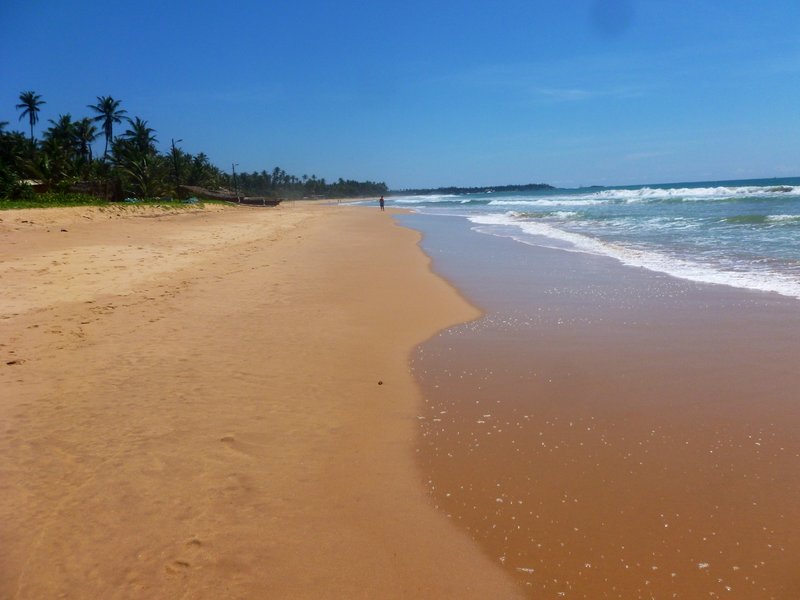 We had a walk down the main road which runs parallel to the beach, browsing the shops and treated ourselves to a posh iced coffee mocha.

As we are on the west coast we had read the sunsets were spectacular and were not disappointed by our first one. Hopefully it will be one of many we can sit and enjoy over and evening drink. 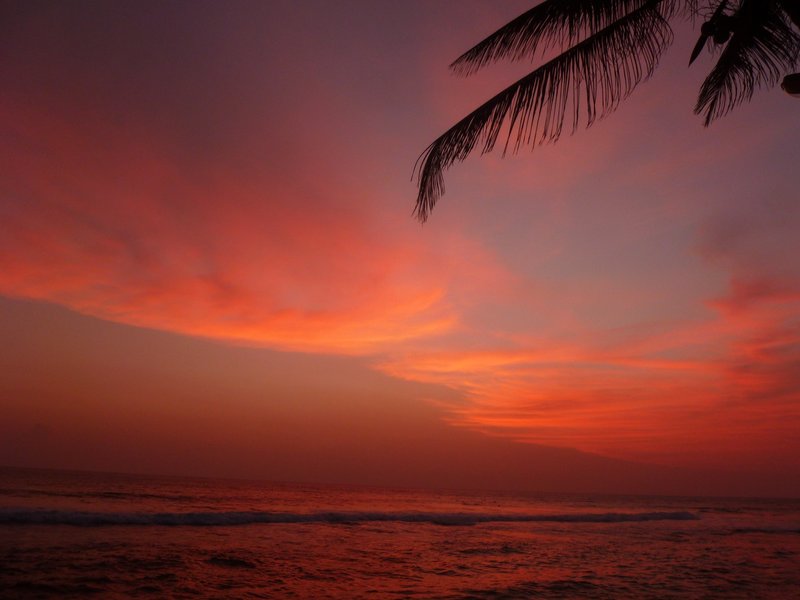 We are staying here for our final few weeks to enjoy a last few weeks of relaxation and sunshine and think Hikkaduwa will be perfect. We can swim, and our guesthouse is right n the beach. We may go diving one last time as we are in season on the west coast and Liam is talking about some more surfing.

The photos are beautiful Grandad is so jealous of the sunset,sounds like you had a bit of a rough journey glad you have found a nice place to stay the beach is again lovely.Hope you enjoy you're last two weeks to the full just keep safe diving and surfing you two have become proper beach bums love you loads from Nan and G xxxxxxxxxxxxxxxxxx

Hope you have a really lovely time relaxing on the beach for your final couple of week.